We are currently in the process of monitoring and then closing a badger sett at one of our sites in Suffolk to ensure no badgers are on site during the construction phase of small scale development.

This avoids any harm being done to this protected species.

Several potential badger holes have been identified and set up with one-way gates, as well as wire mesh secured with wooden stacks, so that any badgers venturing out won’t return. Despite a high
probability that these badger holes have been vacated already, and taken over by rabbits, suitable habitat for badgers has been identified close by so that any badgers here will have a new home to go to. Additionally, the sett hasn’t been closed as a whole, with several other holes present in the adjacent field, outside of the site. Camera traps have been set up to monitor the potential badger
holes on site, as well as sticks placed in the entrance of the holes as a secondary monitoring method. This work is done under a licence and can only be carried out between July 1 st and November the 31 st in order to avoid the badger breeding season and disturbance to vulnerable cubs. However, badger surveys can be undertaken at all times of the year with the optimal period being February to April and then September. 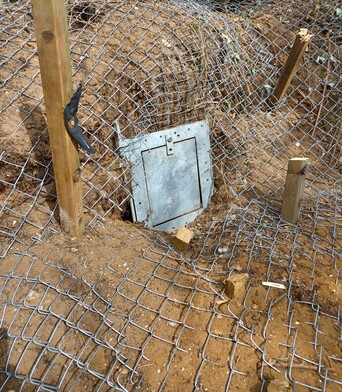