Lies – you ask? What lies? That Climate Change exists? No…that is not a lie, it most certainly does exist, and the science is as clear as it was for the need for a vaccine for the pandemic. There is no doubt it is happening and faster than we are ready for, and perhaps faster than we can avert without big trouble ahead, but we have a chance to avert our extinction. There is no time to waste in tackling it. We live on the surface of an all-too finite biosphere we call ‘The Earth,’ and our collective human influence is global and changing the delicate balances of our environment to an extent we not only endanger ourselves but almost everything else alive.

So what are the lies? The first lie is that it cannot be stopped and we are all doomed. It can be, it can even be reversed, but acting now is essential, we already have the technology to make it happen – but as yet not the collective political will to do it. This means we have to make it happen through our votes, blogs, choices and decisions.

Lie 2: We have to maintain our current fossil fuel dependency to maintain our lifestyle and livelihoods and that going ‘Green’ costs more than we would be prepared to pay. No – that is a lie, it does not. Renewable electricity is cheaper than coal and natural gas-powered generating stations, and cheaper also than nuclear power.  We could be self-sufficient in green energy.

Lie 3: ‘Ok’ you might say… ‘power to our homes could be greener but electric cars work only for short trips – don’t they?’ No – it’s a lie – I have one: I can vouch for this, they get you anywhere you want with a bit of planning, and they save you, or your company, massive sums you currently expend on petrol too, leaving more for you and your family.

Lie 4: The investment in going carbon neutral is too great and unaffordable: No – it would cost far less than we all have just spent on the pandemic, which arguably was a symptom of climate change: And unlike the pandemic, we already had the science and technologies invented to be carbon neutral. So why didn’t we go carbon neutral before when it was not such an emergency? Because of the vested interests of the fossil fuel companies and the political governments fuelled by the proceeds from them prevented progress. So should the polluters pay to fix the problem? What do you think? I think Yes – but I also think that no government has the balls to make them pay for it: I also am sure that we could waste a lot of time and money on reprisals and a negative blame game: That just gets in the way of the one thing that must happen now – taking action. That has to be the sole focus now. These companies need to step up now and help fund the change to sustainable living: or they will fry with the rest of us. If they don’t help this transition and help pay for this, you and I will, and in more ways than just one. Our children deserve a better future than this.

In development, which is the business world I work in, I still come across too many people who are still thinking that it will cost more to create greener homes and greener external environments and they believe, in earnest, that their customers still want manicured landscapes, stripy grass lawns in the open spaces, brightly coloured metal play areas, with neat and tidy railings around, well-tended ornamental flower beds of bedding plants and ornamental shrubs, numerous dog and litter bins, multiple traditional iron bench seats and well clipped edgings, a ‘spaghetti junction’ of metal-surfaced, neatly edged paths and cycle ways, with red and black demarcation between, well signed and managed by a small army of gardeners: costing massive sums to construct and residents happy to make crazy-high levy payments for the maintenance. No – it’s big fat lie number 5.

Do customers still want that unsustainable vision for Green Spaces? No, because they are realising that it is the road to hell, to sustained carbon dependency and climate ruin, with our civilisation ruined with it. It will see us all fry in our own Kentucky fried chicken fat, if we don’t first drown from sea-level rise. The crazy thing is that a greener and more natural approach to open spaces also reduces the cost and boosts the developer’s profits by £millions of pounds each year. So why pedal this lie No. 5: It is a fact that enough customers would buy into a greener, natural, healthier, and more biodiverse approach – and would actively choose it over less responsible developments, for example the RTPI award winning Kingsbrook development in Aylesbury.

We have to stop thinking of ‘Hyde Park’ type thoughts about open spaces and instead think more in terms of Richmond Park, or Windsor Great Park. The latter are natural, sustainable, landscapes that are much higher in biodiversity, much less carbon hungry, much lower cost to build (and I am talking £100’s of thousands of pounds – yes, even £millions). On top of that they are half the cost to maintain, conservatively, too. You see, more natural open spaces save around £10/m2 over the whole green infrastructure area, and for sites with say 10 hectares of green infrastructure – that is a saving of £1 million – that’s £1m – back on the developer’s bottom lines – and all for a better, greener, more biodiversity, and more sustainable, healthier, more easily approved via planning scheme. What’s not to love? Natural play looks more attractive and are far less litigious, than bright metal equipment in safety rubber and tarmac, surrounded by painted metal railings, but above all else, it stimulates greater imagination, adventure, discovery, role play and learning in our children, rather than thinking as children’s physical functions – as FiT do in their 5 play functions for a Local Equipped Area of Play – swinging, sliding, jumping, climbing, balancing. We are not human doings, we are human beings. The developer will be happier too, because such exciting natural play areas cost on average £30k less to build and half the cost to maintain sustainably. My message to developers is this: It is time now to wake up and smell the coffee, because you need to embrace change now, and it will make you richer doing it.

My challenge is this ref. lie No. 5: Do you really think the public would not buy into a development that set itself as a new sustainable and carbon reducing one, with natural, wildlife friendly open spaces, encouraging healthy communities and an ability to commune with nature from your doorstep? I think they would now be delighted by such a move. When making new meadow habitats near people’s homes, there a few rules of presentation and etiquette to make it palatable and workable. It is essential to provide a neat edge to meadows – a mown 1.5 – 2m wide closely mown strip, which serves to prevent calls that the grass has not been cut, but it is amazing how a neat margin can demonstrate how the site is maintained well and stop the misunderstanding about the remaining wilder areas – that need only an annual or biannual strim: See the illustration of one we prepared with Taylor Wimpey at Red Lodge, which worked very well indeed.

Let’s bury these lies, and for development, embrace natural landscapes, low maintenance, low levy payments, low cost, and a more sustainable and a healthier future: Remember this – the future can be bright – but only if the future is Green. 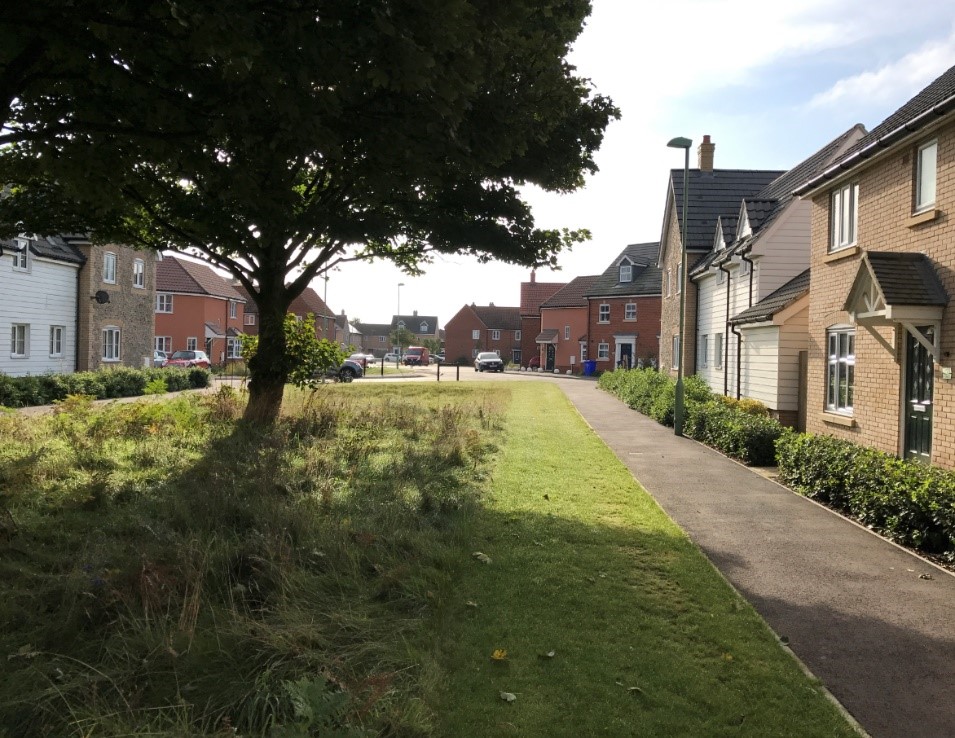